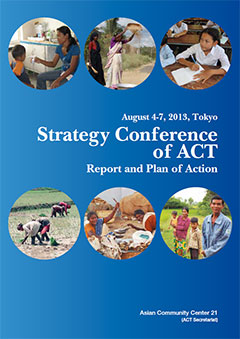 ▲Click the image thumbnail above to open the PDF file.

The English version of the “Strategy Conference of ACT – Report and Plan of Action,” which outlines the results of the survey/study conducted and international conferences held in August 2013, is now available in print and online. These activities were a part of the project titled “New Paradigm of Collaboration among Asian NGOs and the Role of Asian Community Trust (ACT) – Strategy Conference of ACT Secretariat and Leaders of its Local NGO Partners in Asia -.”

In the ACT Strategy Conference, ACC21, which serves as the Secretariat of ACT, invited 5 leaders of its local NGO partners and discussed about the future roles of ACT with participants from NGOs engaged in international cooperation, grant-making organizations and other parties concerned in the context of a continuously changing Asia; verified the present situation of international cooperation efforts and financial aid of Japan; and gathered suggestions for the improvement of ACT.

In addition, two studies were conducted prior to the conferences in August: one is to grasp the current situation of the flow of money (in the form of grants and others) from Japan to local Asian NGOs, and to locate the current position of ACT within this flow; and another is to evaluate the current and past funded projects of ACT and to ask for comments and suggestions from the grantees to ACT. The results of these studies are summarized in the Report and Plan of Action.

The project “New Paradigm of Collaboration among Asian NGOs and the Role of Asian Community Trust (ACT) – Strategy Conference of ACT Secretariat and Leaders of its Local NGO Partners in Asia -“comprised not only of the ACT Strategy Conference, but also of public symposia, seminars, field visits to the Tohoku region by NGO leaders involved in reconstruction efforts after the 2004 Indian Ocean earthquake and tsunami.

We thank The Toyota Foundation, MRA Foundation, and Niwano Peace Foundation for their financial support to this project. Other expenses were covered as publicity cost of ACT and by ACC21’s own resources.